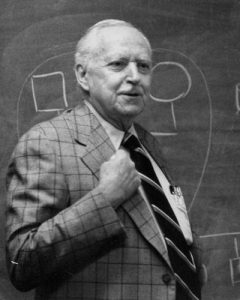 Murray Bowen (1913-1990) developed a new theory of human functioning based upon what was considered scientific in the work of Freud upon studies in evolution and the natural sciences and upon his own research. First called “family systems theory”, Bowen theory is a natural systems theory distinct from general systems theory, from the individual theories of psychiatry, medicine and psychology, and from group theories in sociology and sociobiology.

During his study of psychiatry at The Menninger Clinic in Topeka, Kansas from 1946-1954, Bowen read extensively in biology and the study of evolution. His changing view of human functioning led to the development of a research project at the National Institute of Mental Health in which families with a schizophrenic member were studied over a five-year period. The nuclear family process came alive. From 1954 to 1959, Dr. Bowen began to define concepts about the family as an emotional system that governs the biology and behavior of individuals. The first chapters in Family Therapy in Clinical Practice describe early work in defining the difference between conventional theory and this new view of the human as part of a family emotional system.

By the time Bowen came to Georgetown University in 1959, the basic concepts of theory were organized into eight interconnected variables:

Bowen theory is not a theory about pathology, but about the interaction of variables that produce variation in human functioning. Instead of reducing the explanation of physical illness, for example, to one cause and the affect, natural systems theory outlines related variables to predict individual variation in health. Any symptoms, be they physical, psychiatric, behavioral, social or societal, are studied within the same broad theoretical framework. Both biology and behavior are considered under the influence of the same variables. Symptoms and stability are the outcome of the same variables.

It became obvious early that theoretical differences afforded new avenues and approaches in psychotherapy, medicine, and health care. The theoretical foundation provides the direction for therapy rather than diagnostic categories, techniques, or emotional reactions of the therapist. Bowen theory does not focus on the number of family members in the room but upon the thinking of the therapist. Decisions about who to see are based upon assessment of levels of differentiation of self, upon determining strengths and leadership within the family. In this theory, one therapist best consults to the most motivated and responsible family member or to a variety of family members rather than referring family members to different mental health professionals, an individual therapist, a couple’s counselor, a child psychologist, etc. 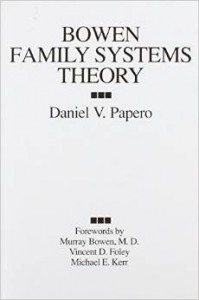 To schedule an appointment or for information, contact Victoria Harrison at 713-790-0226 or vaharrison@csnsf.org.

We are using cookies to give you the best experience on our website. You can find out more about which cookies we are using or switch them off in settings.

This website uses cookies so that we can provide you with the best user experience possible. Cookie information is stored in your browser and performs functions such as recognising you when you return to our website and helping our team to understand which sections of the website you find most interesting and useful.

Strictly Necessary Cookie should be enabled at all times so that we can save your preferences for cookie settings.

If you disable this cookie, we will not be able to save your preferences. This means that every time you visit this website you will need to enable or disable cookies again.

This website uses Google Analytics to collect anonymous information such as the number of visitors to the site, and the most popular pages.

Please enable Strictly Necessary Cookies first so that we can save your preferences!